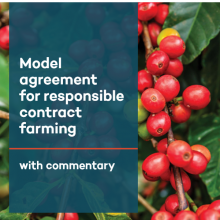 The Model Agreement for Responsible Contract Farming is a simple and practical legal tool to support the implementation of global principles and guidelines and make responsible investment a reality. It is designed to address some of the inequalities in contract farming that disadvantage producers; to help create more equitable and sustainable business relationships as well as a transparent business environment for contract farming schemes; and to ensure the producer is paid a fair price for their goods in a timely manner.

This guide was developed by the Food and Agriculture Organization of the United Nations (FAO) and the International Institute for Sustainable Development (IISD) to aid buyers - agribusiness companies engaged in production, processing or marketing activities - and producers - individual or organized companies or groups - in crafting transparent and equitable production contracts/agreements. The guide draws from the UNIDROIT/FAO/IFAD Legal Guide on Contract Farming, and includes templates with sample provisions applicable to most agricultural production contracts, and can be adapted to specific contexts and legal systems. It is important to note, however, that the model agreement presented is not for livestock production contracts (i.e., for farmers raising livestock on behalf of its owner), as these require specific provisions not included in the guide. For potential users, including inclusive businesses operating in the agriculture sector:

1. Parties should familiarize themselves with relevant domestic laws and regulations related to the contract.

Most agricultural production contracts (even those with multinational buyers) establish purely domestic legal partnerships usually regulated by the domestic legal system of the producer. Domestic law can override a contractual provision, which is why parties must strive to be updated on domestic legal matters. Relevant regulations could pertain to a variety of standards and processes, including food safety and quality, plant health, pesticides, fertilizers, seeds, access to agricultural finance, competition and consumer protection, human rights, labour, and natural resource governance. It is also important to note that some governments enact special legislation for certain contracts in order to reduce any information asymmetries, as well as to punish unfair business practices. Some governments also provide specific recommended avenues for resolving disputes. In cases where no special legislation exists, by default, general contract law applies.

2. Consider a third party to facilitate negotiations in order to promote greater transparency and accessibility.

The contract should in writing and the producer must be given enough time to consider the terms, seek advice, and properly understand their obligations. In cases where the producer experiences difficulties assessing the terms being offered—due to literacy level, language barrier or other factors—third-party facilitators may help ensure that the terms and the negotiation process are accessible to the producer. These third-party facilitators may be producer organizations who represent their members, and are sanctioned to negotiate on their behalf. In some cases, a public entity such as the Ministry of Agriculture or a cooperative development authority may also be suitable for overseeing the negotiation and conclusion of the contract.

There are many cases where women farmers are not explicitly provided for or included in contracts with buyers, despite them often doing most of the work. To account for their value in the production chain, site visits and interviews with farming households should be conducted. Including women farmers in crafting the agreement will ensure the legal basis to enforce the terms of the agreement in their own right, and they can have greater control over the proceeds of the contract. When signing the contract, more than one person on the production side can be signatories, such as a married couple who are both working to produce the goods required.

4. Explicitly define and describe any production method requirements that must be followed by producers.

This includes land preparation, harvesting, post-production handling or any process/input involved in production. If possible, the contract should refer to an attached document as reference, and have a provision detailing the buyer's or an authorized third party's right to audit, track and confirm compliance. The contract should also clearly allocate responsibilities between parties for providing and using inputs, whether these are tangible inputs like fertilizer and seeds or intangible inputs like technical assistance and training.

5. Determine the product output arrangement and lay out the process of delivery, inspection, pricing, and payment of goods.

Determine if the output arrangement with the producer is exclusive or non-exclusive to avoid side-selling or contract non-compliance. The contract should specify when and where goods are to be delivered, as well as the mode and currency to be used for payment. The inspection process for required produce should be described clearly so that producers are not vulnerable to arbitrary decisions made by the buyer in examining and grading the goods. Ideally, the producer should be present or represented during inspection, and an independent third party (approved by both Parties) should also be involved in the inspection process.

Contract farming agreements should ideally encourage a reduction in the use of chemical fertilizers and pesticides, greater efficiency in their application, and increased use of biological inputs. Technical advice and training should also focus on promoting sustainable farming practices.

7. Determine and clearly state the contract’s duration, renewal terms (if any), and the possible grounds for termination.

The duration of a contract can depend on the kinds of crops involved, as some, like field crops and vegetables, are concluded on an annual or seasonal basis, while other crops may require longer contracts. Contracts should explicitly state whether and how the contract may be renewed. Parties should also determine acceptable justifications and excuses for failing to comply with the contract such as force majeure, and parties may also wish to include a provision allowing the buyer to transfer its obligations under the agreement to an affiliated company or another third party. This can afford flexibility, for instance, if the buyer faces financial difficulties and cannot perform its obligations like supplying inputs. The contract should also state the notice period and grounds for termination; the most important grounds for termination are: a) termination following breach, b) termination by mutual consent, and c) termination by one of the parties at their convenience.

8. In the case of breach of contract (or unexcused non-performance), the contract should specify remedies that encourage cooperation and communication between parties.

With the growth of global supply chains and as food systems continue to transform, the quality and clarity of contracts become increasingly important to not only ensure the efficiency of agricultural value chains but to also uphold the rights of both buyers and producers involved. When negotiations and agreements among parties are facilitated properly, contract farming (often made to gain exclusive access to produce) can provide benefits to both producers and buyers—producers can increase their income by gaining stable access to more remote and profitable markets, and access to improved inputs and technologies; buyers, on the other hand, benefit from being able to secure a stable supply of quality agricultural produce in the required quantities. Buyers are also able to acquire produce that is grown and processed in accordance to specific production methods and standards.

While this guide provides writing samples and general recommendations, parties to contract farming agreements are advised to also refer to existing global principles and guidelines for contract farming, including the Voluntary Guidelines on the Responsible Governance of Tenure of Land, Forests and Fisheries (VGGT) of the Committee on World Food Security (CFS), the CFS Principles for Responsible Investment in Agriculture and Food Systems (CFS-RAI), and the OECD-FAO Guidance for Responsible Agricultural Supply Chains. Both parties should keep the principles of fairness, cooperation, good faith, reasonableness, consistency, and transparency in mind when entering negotiations and crafting contract farming agreements.

In terms of risks, it is useful to also keep in mind that producers can be particularly vulnerable to power imbalances between them and the buyer, which can lead to unequal division of risks and responsibilities. Imbalances in power can also result in nontransparent pricing mechanisms and inspections processes, leaving producers vulnerable to the whims of a buyer with little or no room for negotiation. The greatest risk for the buyer, on the other hand, is that a producer can engage in side-selling, or not comply with the agreed terms for produce quality/quantity or delivery. Thus, clarity in crafting the agreement is essential, and it may be helpful for parties to agree on a list of definitions to clarify potentially controversial terms. For instance, it must be clear in the contract what specific standards must be met for delivered goods to be considered of good or high quality. If an existing global/national standard is to be followed or used, this must be clearly cited and explained in the contract. In order to avoid potential breaches of contract, parties must lay out the terms as clearly as possible. Taking these additional steps to uphold transparency and fairness helps build goodwill and trust between parties, and thus, create more sustainable and longer-lasting partnerships.