Following a number of management roles in NGOs and the tea sector, Tom became an independent consultant focussing on private sector development and cross-sector partnership. He has completed assignments for, among others, DFID, GIZ, the World Bank and UNDP. For a decade Tom had a lead role in management of the Business Innovation Facility (BIF) for which he was Technical Director for which he supporting BIF’s work in Myanmar he was involved in supporting large companies to develop innovative business models that benefit people on low incomes. This year Tom has led new partnership development for the Work and Opportunities For Women (WOW) Programme and has undertaken a review of a market-systems programme in Zambia and an evaluation of a partnership between Oxfam and Unilever.

I looked at the companies that had made commitments in agriculture and agribusiness, for one of the seven key sectors in which BCtA signatories are benefitting poor people section. This blog looks beyond what we were able to publish in the report and suggests that there might be something rather interesting about IB initiatives in this sector in terms of the support activities to farmers that they have to offer in order to achieve their primary objectives.

In the section of the report that we wrote, ‘Boosting agricultural productivity and livelihoods’, as with all BCtA companies (and in many studies of IB across many sectors) we divided the companies in this sector into producer or consumer focussed companies. In agriculture those companies which are focused on their own supply chain are those where the farmer is a supplier of raw materials, and the second group are instances where the farmers is a consumer of agricultural inputs, information or finance.

We then noted the BCtA initiatives that we were reviewing fell into these groups as follows:

The companies noted on bold in the table above were the ones interviewed, while the companies in italics sent answers to a survey that we used to compile the report. There are 21 initiatives in this sector, and 9 of these are providing a service or product to farmers and 14 are ultimately procuring raw materials that farmers produce and/or doing more general support to a supply chain such that famers can supply more goods. Note that BCtA have very recently written more about three of these initiatives that engage with smallholder farmers, Sambazon, Juhudi Kilimo and Taze Kuru. The Practitioner Hub is also publishing extended interviews I had with staff from L’OCCITANE EN PROVENCE and BASF India and a very insight blog from Yara is now on the Hub too.

What we haven't reported yet is how each of these initiatives actually seek to engage with, and support, farmers. This is ‘intention,’ as it’s derived from the BCtA Commitment, but where possible this was checked against actual in interview. The following graphic shows the number of a different type of engagement or support that I felt was intended, broken down by our ‘consumer’ or ‘producer’ typology: 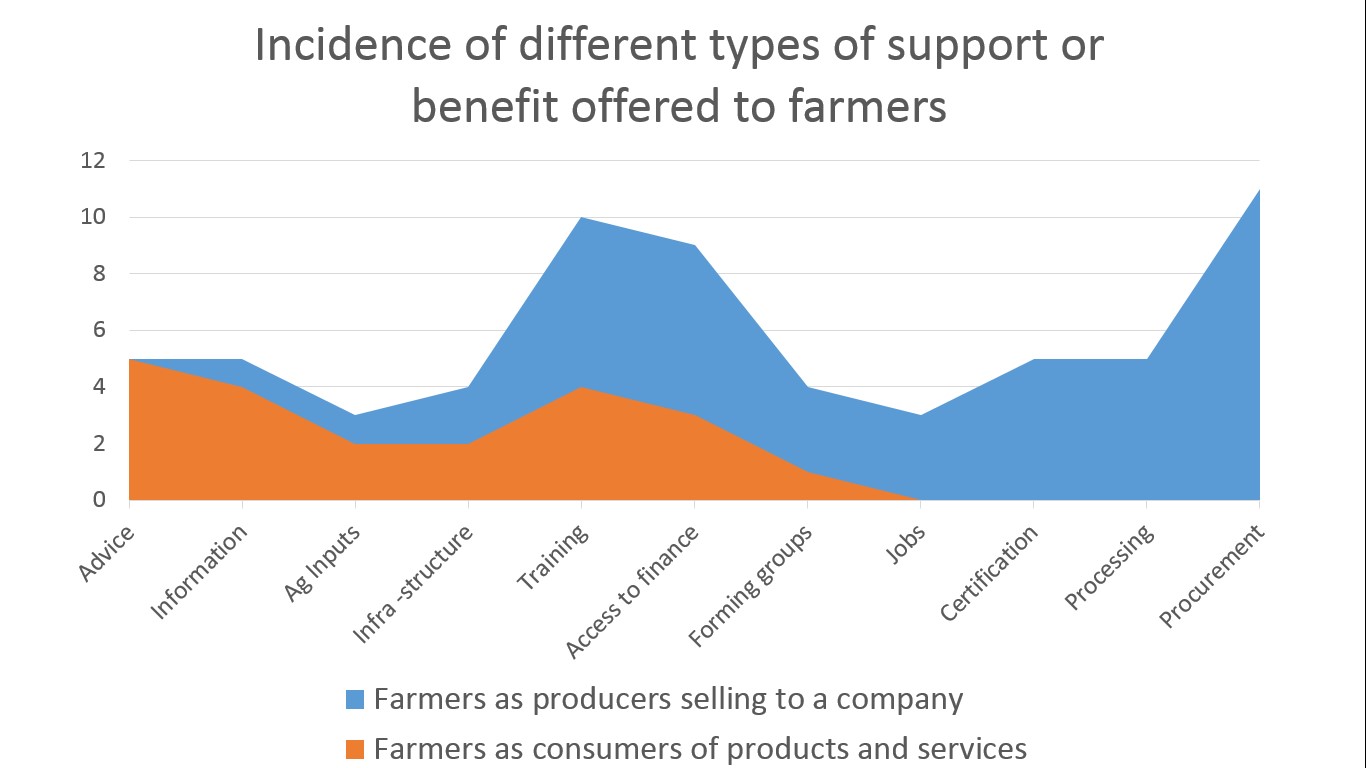 What is immediately apparent is that there is a wide range of types of support. This is consistent with the complexity of agriculture as a sector. It is very rare to find that there is just one ‘golden bullet’ that can help small farmers. It is not enough, for example, to supply farmers with improved seed without access to enough water, fertiliser and pest and disease control. These inputs require both capital investment and also seasonal finance. Since agricultural commodity market are volatile, marketing services, insurance, exchanges, warehouse receipts systems and forward purchasing through contract farming all then come to the fore.

Farmers small and large know this very well. I have reported in a previous blog about meeting farmers in rural Bangladesh who were engaging with a large agricultural supply company and were savvy about what areas they needed to address in their negotiation.

This does not mean that they do not then avoid any risk and as the same story unfurled things did not go to plan because that particular pilot IB initiative had not helped farmers to address all of the technical issues around growing a new crop as it turned out. I have noted in another blog that supporting farmers with only a partial solution can potentially result in a high risk/low return scenario that can be a disaster for them and their families.

This is consistent with the findings of the report on the BIF pilot ‘The 4Ps of inclusive business: How perseverance, partnerships, pilo...’:

‘Business models with an inclusive producer focus need to be carefully constructed and are potentially rather complex. There can be a tendency for companies to over simplify the model at first, not realising that there are no short cuts when setting up supply chains that involve small farmers.’

However, there was also something that found rather striking about the support offered to farmers by companies in the BCtA portfolio which cuts across the definition as consumer or producer initiatives. Many consumer and supplier focussed projects make use of the same tools and approaches such as training, helping with finance (or providing it themselves as their service) and supporting developing of useful infrastructure.

Training in particular stands out as a very common activity used in many BCtA initiatives. This reflects the fact that the most common external challenges reported by BCtA companies are lack of skills, capacity and knowledge. BASF’s Samruddhi initiative, which is providing smallholder farmers in India with demonstrations and advice on the benefits of using chemicals to improve yields and showcasing BASF products, is a very interesting BCtA initiative which is a great example of this. As I noted above, find out more about Samruddhi in a new interview for the Practitioner Hub.

These challenges – and therefore the solutions that innovative companies working in agriculture are finding to address them – apply to both consumer and producer initiatives. It is clear that engaging with smallholders, whether to buy supplies or sell services, is ‘high touch and high engagement’, as is very well explained in this month’s Editor’s Choice, ‘Growing Prosperity: Developing Repeatable Models to Scale the Adopt... from Acumen and Bain.

I conclude that the usual way of breaking down IB initiatives, as either consumer or producer focussed, is still useful for the agri-business sector. However, it is also an unusual market in that the nature of these initiatives across this typology is far more similar than for many other markets. In the agri-business sector, the low income smallholder farmers who are either customers or suppliers are of course the same people. When seeking to explain why so many IB initiatives in this sector have the same features perhaps it is simple as that.

This blog is a part of our March 2015 series on inclusive business in the agriculture sector. To view all the articles in this series click here.

Poverty Alleviation and Women's Empowerment When Women Use Tech