I’m nodding as I read. That fits. I raise an eyebrow, and scribble a question mark beside a paragraph. Something surprising. Not many ‘annual reports’ would keep my attention so well. But the African Enterprise Challenge Fund Annual Report 2015 is not just any annual report. It’s the first public annual report since the AECF was launched 6 years ago and it’s sharing a wealth of findings: ten lessons that the fund managers have learnt on how to run a good fund, plus data on the commercial and social performance of enterprises in their main sectors, agriculture, energy and financial services.

AECF is a challenge fund aiming to contribute to the growth of sub-Saharan Africa’s agricultural, agri-business and renewable energy sectors, to deliver sustainable benefits for the rural poor. It provides grants and non-recourse loans to businesses that demonstrate commercial viability, innovation and potential development impact.

There are ten reasons that I welcome this report:

1. ‘Ten things we’ve learned about running an enterprise challenge fund’ condense years’ of experience onto one page. Some lessons are about what make businesses work: rural customers make rational purchasing decisions (lesson no. 2). Some are about successful fund management: the entrepreneur who can talk the talk should not be given funding over the one who can’t but who has been out there getting the job done (no. 10). They make sense and sometimes it’s good to see sense written in black and white.

2. Great diagrams convey results. This one shows total benefit by project and by sector. Each colour is a sector, so you can see how significant agricultural projects are to net benefits so far (they are the most mature). But each box is a square, so you can’t miss the fact that one information project and 3 agri projects account for half the total impact. 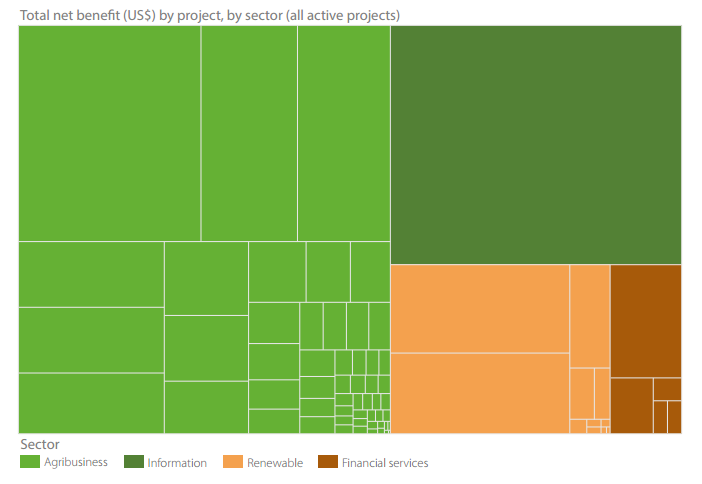 3. Agricultural businesses seem to be doing OK! Given agribusiness is such a tough nut to crack, this bodes well. 66% of the portfolio is agribusiness. To data they are delivering $63.5 mn of net benefit to 569,000 poor people. Some of the business are already at scale. Net benefit per household for agribusiness projects is $115 per year. That’s significant.

4. Commercial trends and differences between sectors start to emerge. Most challenge funds seek to support projects that can reach ‘commercial viability’, but until it arrives, it’s hard to measure. Particularly in the agricultural sector, the first AECF grantees are mature enough for real results to emerge which help us understand what might drive ‘commercial viability’.

Such disaggregation is essential if aggregated reporting of revenues and EBITDA is to be used meaningfully to assess progress. The report states that most projects will only be EBITDA positive once they each scale, at which point revenue growth and gross margin will be evaluated at indicators of future viability. It is clear that until then, these indicators need to be on track, and for the fund manager to track them, but not to aggregate or benchmark them across the portfolio to illustrate ‘success’.

5. Results for the energy sector illustrate clearly how successful innovation is emerging from the convergence of mobile payment, remote monitoring systems, LED lighting, battery technology and the falling cost of solar panels. AECF invested over $10 mn in seven start-up Pay-Go solar companies and is seeing how this market is now taking off. $120 mn invested to date by others, $480 mn expected over the next three years. Mkopa is described as one example of success: the first 100,000 customers took two years. The next 100,000 took 8 months. The authors conclude indicate strong potential for business to reach consumers that large government investment cannot.

6. The importance of influencing market practice, as well as delivering results on the ground, is handled with nuance. AECF is not an all-out market systems intervention, prioritising only what will change how markets work. Grantees are assessed for their own viability to reach scale, but their influence on markets is also sought and tracked. Clear examples are given of how grantees have influenced registration processes (e.g. of baculovirus product in Kenya), sparked copycat replication by others (e.g. sourcing milk from Milk collecting Centres in Tanzania) or influencing factor markets (e.g. increase in mobile money kiosks in operating areas of a renewable energy company in Tanzania).

7. I have been saying for many years that ‘scale,’ in terms of numbers of people reached, means different things for different types of business. Those sourcing from producers might reach thousands, while those selling goods and services to consumer might reach millions, but with different benefit levels per household. AECF now provides data for some such comparisons, although the businesses are not yet at scale. To date, agri-input supply business are reaching over 12,000 households on average, renewable energy over 10,000 over average, and financial services almost 5,000 on average. In contract, agro-processing and agribusiness marketing/distribution are reaching below and above 1000 households on average. The latter stands out for delivering the highest benefit per households by far, estimated at $479 (skewed by one particularly successful project). Energy businesses are estimated to deliver around $70 of benefit per household.

8. At last, a report that has some clarity on numbers of beneficiaries. AECF-funded projects directly benefited 1.45mn households in 2014. The team deduct those that were already benefiting, to bring this down to 1.39 mn net beneficiary households. Multiplying up, they say this is nearly 7mn rural people in 2014. They also show the cumulative results year on year. This is not rocket science, but they are clear when talking households or people, and per year or cumulative, which is more unusual than you’d think.

9. Reasons for failure are given, with production issues (inputs, costs) and marketing and selling issues (slow updated, limited distribution channels) topping the list.

10. This is a first but huge step towards public sharing of results from AECF. This is one of many challenge funds using public money, but so few truly contribute to public goods of knowledge. Some of the disaggregation, is directly comparable to other portfolio analyses. So much more could be achieved if every donor-funded challenge fund shared results like this.

There are also things I query. Social impact is discussed only in monetary terms as income or savings per household. While I understand the need for comparability, I know this must be based on huge assumptions and miss out some important non-monetisable impacts. Business maturity is a huge confounding factor affecting the commercial and social impacts reported to date, but results by sector are not disaggregated by age or stage, presumably because sample sizes would be small, challenging both interpretation and confidentiality. Additionality is fairly cursorily covered.

If you like data, you’ll like this report. But it’s not just a load of old data. Results are nuanced. Success is not measured in one dimension. Sectors are not ‘worse’ or better than others, but the complexities of each sector emerge. Some struggle but show high development impact. Some have faster routes to scale.

Reading the report I am immersed back to the days of writing the final reports from the Business Innovation Facility. We similarly compared commercial and social impact, contrasted sector performance, used this breakdown for types of systemic change and types of obstacles. In BIF we ended up writing 2 reports for 2 different audiences: one on business models that work for enterprise (the 4Ps) and one for donors and those interested in the challenge fund model (Adding value to innovation? Lessons on donor support to inclusive business…). AECF’s report also speaks to both audiences, but all in one document. Don’t let that put you off. Whether you are interested in performance of the enterprises or the fund, dip in. Or start with the series of blogs on our AECF report page which share key topics for different audiences.

Final reports of the Business Innovation Facility, published in January 2014, cover some similar analyses for 40 businesses and a dataset of only 2-3 years:

This blog is a part of the October 2015 series on inclusive business portfolio impact and learnings. For more opinion, analysis and studies click here.

How do you market improved cookstoves among host and refugee communities?