Susann leads the Communication and Digital Innovation agenda of iBAN. Susann has a wide range of experience in stakeholder engagement and advocacy for topics of global relevance, including private sector development and disaster risk finance. Working for the United Nations, the World Bank/IFC and the International Monetary Fund (IMF) for seven years prior to joining the Deutsche Gesellschaft für Internationale Zusammenarbeit (GIZ) GmbH, she was assigned to projects in South America, Africa, South Asia, and Eastern Europe.

To scale your business in a sustainable manner, don’t try to be what you are not in order to appease other people outside of your business.

Interview with Will Coetsee, Managing Director of Botanica Natural Products, on the meaning of scale and the lessons learned over time on how to organically grow a business in rural Africa.

What motivated you to join your field of work and why did you decide to become an entrepreneur?

I come from a family of entrepreneurs and that motivated me to become one as well. I then studied an MBA and then my family started a business with a French and a German company. That was the start of Botanica. In sum, it was the curiosity for entrepreneurship but also this very interesting topic of plant extracts that are indigenous to this area.

What role does improving the lives of communities in rural South Africa play for your business?

Botanica was established in this very remote, northern area of Limpopo, South Africa, a very rural area. Our social development objective was always one of respect; to say that we respect people who are working outside in the fields, because they understand the agricultural aspects of the plants. Overall, we have been running different businesses in this area since the early 1990s, with Botanica being the youngest one. We have a long history of working with communities here and have seen different generations of people we are working with. And because it is such a rural area a lot of the people know each other, so in that case there is a real social responsibility between people. If somebody comes to work for you and they would then bring their brother or their sister or their aunt, there is a social responsibility that says “this is how we have to do this job because everything impacts everybody”. In terms of Botanica, we have started working with schools predominantly. We do various workshops, trainings, and different activities at local schools. The objective of that is not just to do some CSR, but also to show people, and the learners specifically at these schools, that there are jobs in this remote area, so not everybody has to urbanise and move to Johannesburg or Durban, or one of the other urban centres. There are jobs here that can pay well, that can also give them opportunities for further growth and employment.

What role do the communities play for scaling your business?

What we have been doing for the past 4 years, is scaling-up the project. One of the major challenges of scale is related to fixed- or over-head costs: if we were to establish a plantation for a specific plant, there is a large fixed costs component associated with that, that you would have to carry on a monthly basis. Botanica has therefore been starting to work with outgrowing community cooperatives. Each cooperative grows one hectare and then we help by setting up 40 of these cooperatives. Each cooperative can supply their produce to Botanica. This is a better solution than Botanica having to establish another 40 hectares to absorb the over-head fixed costs of these 40 hectares. Working in this way with the communities allows us to have an integrated relationship with the communities: everybody can see that everybody benefits from it. It’s not only the communities that benefit from working with Botanica, it’s also Botanica that benefits from working with the communities. 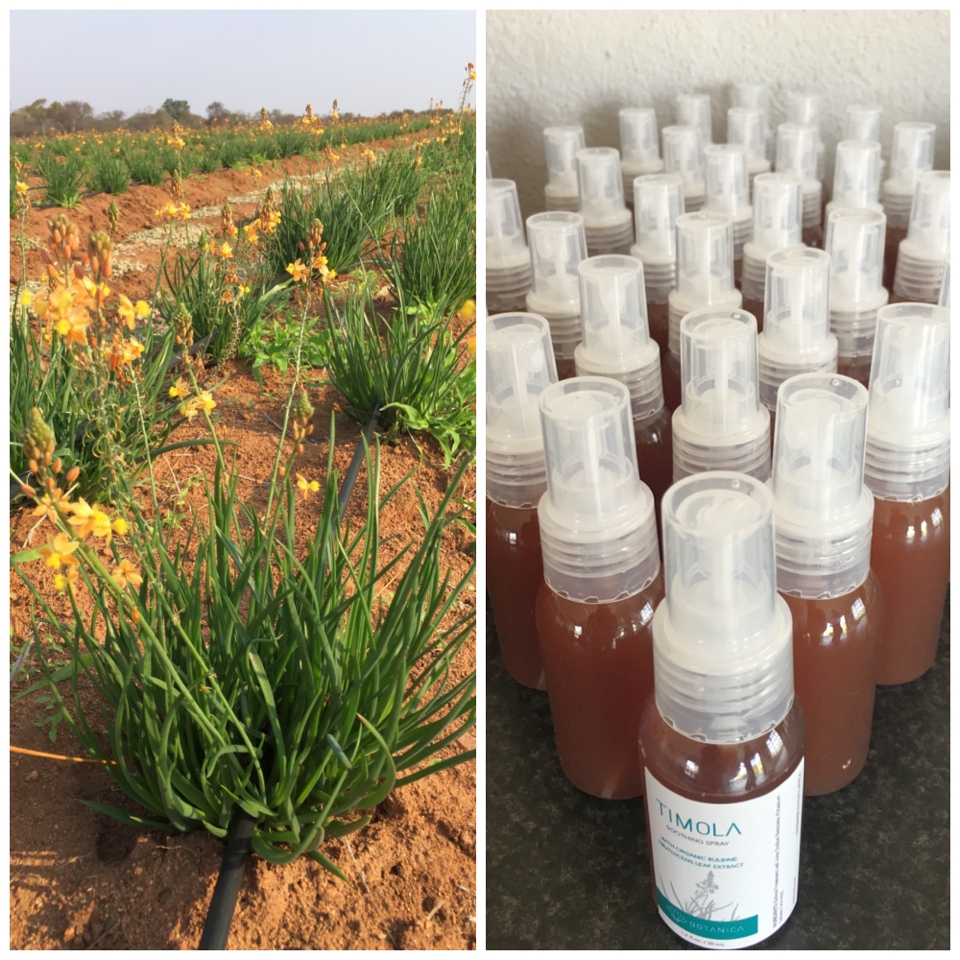 Beyond the active involvement of community cooperatives, what advice would you give to an entrepreneur aiming to scale their business?

I always say that I’m a master and a novice. And by nature, a master has failed more times than a novice has even attempted. We’re superb at failing but also at learning from our failures. At Botanica, for example, we have received a development grant to start our business. I have spoken to entrepreneurs who are in the situation of pre-scale or right at the start, they all think that the first thing they need is money. And that’s where the first piece of advice from my point of view would be: you don’t need money, you need revenue. Even if it’s just selling one thing every day, making revenue would be the focus, because then the other things will take care of themselves. From our perspective, we received a development grant, we built a big factory, employed 25 full-time staff members, we set up a 10-hectare plantation, and in fact, we dug a very big financial hole. Even though it was beneficial, because it meant that we could operate at a higher quality level than we may have been able to achieve without that grant, immediately it put a lot of pressure on the company, because we had a lot of fixed and overhead expenses, which we had to absorb once the grant financing was finished. In that sense there is a real case to be made for organic growth, not having a lot of external funding pumped into something and building a big building and clearing big fields and employing lots of people before you’ve generated any revenue.

Are there any other lessons learned from failure that you could share?

Absolutely. I think as entrepreneurs, we try to seem to be successful before we have actually done anything. That is why I have such a focus on generating any form of revenue before anything else. I think one of the biggest challenges that we have faced was in 2014. That’s when we first cooperated with SEED and other organisations to try and see how we could grow our business, get exposure, and get networking opportunities and marketing, etc. We failed by trying to be something that we are not, in order to appease other people outside the business. When we were trying to attract impact investment, we would go to impact investors, and they would say “this project is fantastic, but your ticket size is too small. Don’t you rather want to aim for 2 million Euros?” We did not need that much funding but we would rewrite the plan, to try and inflate it artificially to attract interest. Then you would go to the next organisation and they would say “no, no, this is too big, we are talking about 200 000 Euros”, and we would rewrite our business plan again, instead of just looking at what we wanted to do and being very clear about what our objectives are. I think that was a very big setback for us: to realise that we should not try to force ourselves into a mould in order to appease or attract interest. Because if we were not interesting enough for these types of investors as we were, then the fit was not there in the first place.

Why do some companies scale in a sustainable manner and others fail to do so?

I think it’s a hybrid of two points I raised. One is organic growth, and the other one is a very clear focus. I think organic growth on its own isn’t going to solve problems necessarily, sometimes you need injections of finance to get you to the next level, but you have to make sure that it is actually going to fulfil the objective that you have. Having that clear focus is determined by the strategy and by the company's objectives. I often say that when someone gives you a hand you must always realise there is an arm attached to it. There is no free money - they may make it more challenging for yourself in the future.

Are there personal drivers that are especially important to scale a business?

From a personal point of view, I always have three words that guide my actions. The first is focus: to have clear objectives. The second is energy, if you don’t have energy you might as well give up, because it is going to take many late nights and early mornings; it’s going to take thinking about your passion over weekends and holidays and so on, so you need to have energy. The third one is action, so focus, energy and action, because if you don’t take action you won’t make mistakes, and if you don’t make mistakes then you don’t learn. That is exactly how we learned at Botanica.

Is there anything else you would like to add when you think of the theme of scale?

The only final point from my point of view is that I think that it is important that small businesses, entrepreneurs, family businesses or social entrepreneurs need to realise that there is a difference between being a great company and being a big company. There should no longer be such a focus on becoming bigger, just making revenue and growing and growing, but rather on becoming much better at what we do. Profitability will then follow. I think often there is a focus just on growing by X per cent every year, instead of making sure that we do what we do in a better way, which will grow our profitability. I think the focus and the impact this would have, not only on the community in the social part but also on the environmental part, is to do what we do but to do them better every day.

Scale related to growth is actually not something that you think of as a smart solution?

Exactly, in our experience, we have a plant from which we extract an active ingredient at a yield of 30 percent. We could improve our process yields from 30 to 60 percent and it would be the same net effect as adding 30 percent of our plantation and keeping our yield at 30 percent. So in terms of scaling the business, I would much rather scale it at being more effective and more efficient, than just adding more farms and more costs and more revenue.

Interview Will Coetsee: “Botanica is ready to engage impact investors”