Can start-ups scale? Can social enterprises reach sufficient millions of people to really crack problems of poverty? This question has been around for many years. Now first answers are emerging.

A crop of ‘breakthrough’ social enterprises are emerging. They are growing fast, securing investment and partners, and reaching millions of people. Of course they do not prove that all social enterprises scale, but they certainly show that they can. This month, the Practitioner Hub is brimming with news from them.

Five years ago, some had an assumption, some a question: start-ups are great for innovation, but do we need to rely on large and multinational companies to reach scale? Emerging evidence suggests ‘probably not’. Data today does not prove the opposite – that SMEs are better than multinationals for scale – but it does challenge those initial assumptions.

An important source of data is the recent review of the portfolio of the Business Call to Action (BCtA), ‘Breaking Through’, conducted by BCtA with a team from Ashley Insight. Half of the 94 member companies are large or multinational, for whom their inclusive initiative is one of many business lines. Half are ‘Emerging and maturing’ companies, whose business is young, and premised on engaging the Base of the Pyramid. A blog by co-author Lara Sinha this month provides a fascinating comparison of the characteristics of these two groups. As BCtA’s Suba Sivakumaran pointed out at the report launch, the commercial drivers for the emerging companies are strong, and survival depends on success of their initiative at the BoP. The term ‘small and medium’ is beginning to be too constraining to include all the ‘emerging’ companies. Take ZHL Ambulance Service in India (topic of the Hub’s Editor’s Choice this month) as an example: founded in 2005 they now have over 5,000 employees which does not fit most definitions of ‘SME.’

Comparing these two groups of companies, the findings really surprised us:

The details are shared in a blog by my colleague Joe Shamash, in his ‘Brief Look at Revenue and Reach of BCtA members’ and it’s well worth scrolling through his graphs.

Not surprisingly, both groups of companies have some that are progressing slowly and some flourishing. The emerging and maturing companies had more at either end of the spectrum (‘progressing slowly’ or ‘flourishing’), whereas initiatives of large companies are more often perceived (by the company) to be ‘on track’. Several of the emerging and maturing companies are in finance, energy and health, which are sectors that show high potential, though also some failures, as outlined in my recent blog comparing progress in inclusive business across sectors.

In the energy sector, SolarNow is a great example of a ‘breakthrough SME.’ Our interview with Willem Nolens, their CEO, explains how consumer financing , product quality, and local word-of-mouth – and definitely not an NGO or donor-led approach – have been critical to build the foundations for success.

The role of finance is key. We often hear how hard it is for SMEs to access finance and how hard it is for investors to find investable propositions. So it is great to hear that SolarNow have just closed a €2mn equity investment, which will finance faster growth and geographic expansion. Another BCtA member, Parag Gupta, CEO of Waste Capital Partners has even more astonishing news: their first investment round was so successful that they were turning away willing investors. I first came across Waste Capital Partners some years ago in the Innovations Against Poverty portfolio: an innovative company that initially barely registered on our M&E metrics for revenue or numbers served. In this video, Parag explains how that early risk-tolerant grant finance from IAP was critical to cross the gap to where they are today, rolling out across multiple Indian cities.

For other breakthrough SMEs, a business to business partnership can be the key thing that unlocks scale. Another great interview, with Ting Shih, CEO of ClickMedix focuses on how partnership with Medtronic, a global medical device manufacturer, is the driver of fast growth for ear-screening services that harness the mobile-enabled applications and connectivity of ClickMedix. Partnerships have equally proved critical for the distribution model of PagPop, rolling out mobile credit arrangements to Brazilian entrepreneurs, as Marcio Campos explains in his interview.

A new driver of growth has been spotted, and this is really good news. We always hear about regulatory constraints. There are now cases where positive regulation contributes to growth of these emerging inclusive businesses. Suzanne Krook (nee Dagseven) shares examples from the BCtA report, while the CEO of Empower explains how regulation helps their business expand its training offering in India.

The recent SEED conference, highlighted by Anais Mangin, profiled the success of SEED award winners, which are innovative companies using entrepreneurship for solutions in rural development, energy, and sustainable development. The list of award winners is an encouraging array of the next generation of innovators that are following behind.

The stories tell of energy and enthusiasm. What does the data show? The graph below amalgamates data from the last year for 76 emerging or maturing companies in three inclusive business portfolios: Business Innovation Facility pilot (2010-2014), Innovations Against Poverty (2011-2013) and Business Call to Action (ongoing). It shows what we expect: annual revenue varies widely. Plenty are still at zero to $10,000, but almost as many are between $1mn and $10 million p.a. The common theme across all these portfolios is that it takes time – about a decade to get the model right and scale. But at least we now have evidence emerging that some of them are getting there. 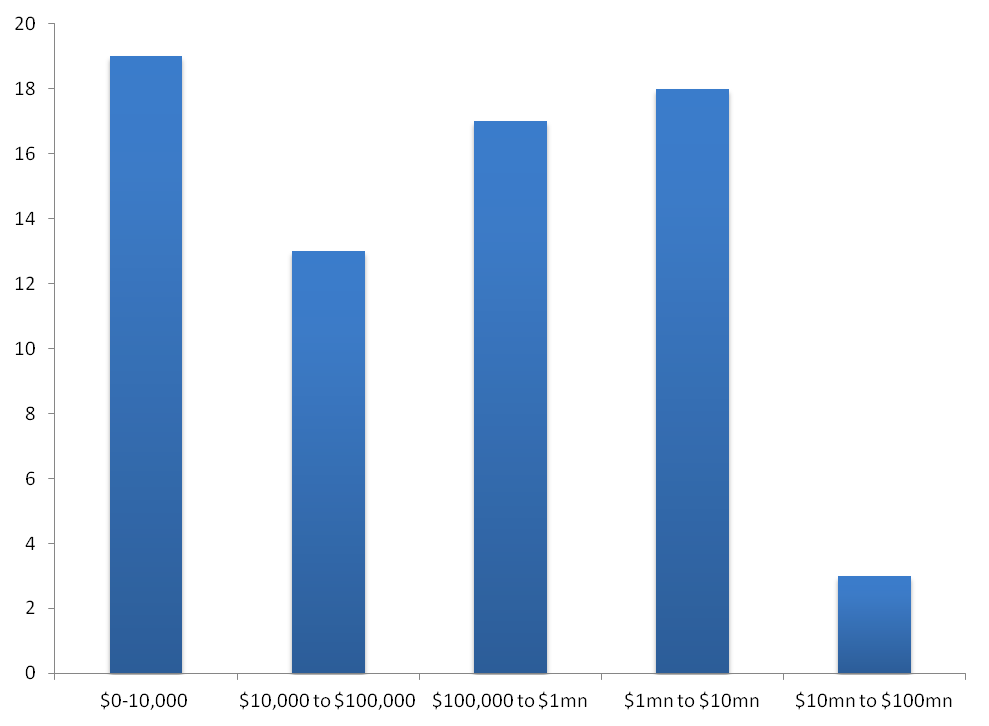 I don’t want to fall into the trap of over-hype. We’ve had too much of that. We’ve seen at least one well known innovative company win plaudits at the Ashden awards, but then disappear, and plenty of others that never quite got off the ground. Sharing a panel earlier this week with Richard Gomes of Shell Foundation, I presented some of the encouraging results from breakthrough SMEs. Two of the maturing companies identified in the BCtA report are indeed supported by Shell Foundation: Envirofit (selling improved stoves) and D.light (selling solar-powered lighting). Without detracting at all from the success of each of those companies, Richard reminded us not to regard this as ‘success’ and job done. These companies still represent a fraction of the total BoP market and all companies trying to expand in this space face huge obstacles.

But where evidence exists, let’s share it, review it and learn from it. It is clear that the journey is long, and that every business model takes time to get right. It is also clear that it is not impossible.

Talking #InclusiveBiz No. 3: Impacting the growth trajectory of women founders through innovative initiatives, such as Global Scale Up X