This blog is extracted from the 2015 Smallholder Farmers and Business report from Hystra. The findings of this report are based on an in-depth review of the performance and work of 15 pioneering organizations that have found innovative, market-based solutions to working with smallholder farmers. Click here to read the full report.

Convincing farmers to adopt new practices or technologies is challenging. However, their behaviour does not seem driven by the amount of money they need to spend to improve the productivity of their farm, or by the attractiveness of anticipated returns. Instead, what they fear most is being locked into a situation that leaves little chance to return to their previous methods.

Much has been written on smallholder farmers risk aversion. Understandably, a farmer dependent on a small plot of land to feed her or his family thinks twice before changing anything that could jeopardize the harvest, and result in starvation. But we wanted to understand specifically what drives farmers’ adoption of a new product or practice or hinders it.

Penetration rates among farmers varied significantly across our 15 case studies: a cluster of case studies managed to reach a penetration of 60 to 90 per cent over time, while others were stuck at 15 to 25 per cent. Interestingly, the prospect of important financial gains does not seem to drive farmers’ behaviour. As shown in the table below, some of the case studies that bring the highest increases in net income record rather low penetration. And the case study that recorded a 90 per cent penetration helps farmers achieve relatively little additional net income per year. Similarly, it is not the level of investment required that puts off farmers. Two case studies requiring farmers to pay upfront 40 and 60 per cent respectively of the value they can hope to get from their investment recorded very high adoption rates, while other case studies that require little or no investment recorded relatively low levels of adoption. According to our analysis, the single most important factor driving farmers’ adoption is how easily farmers can reverse their decision. Case studies that enjoy rapid and widespread adoption are those that avoid engaging farmers into very long-term commitments. In those cases, farmers can go back to their previous practices if they so wish, at little or no cost. On the contrary, the case studies that struggle to achieve widespread adoption are ‘one-way-tickets’, whereby it becomes very difficult for farmers to go back to the status quo.

Situations can vary, but a ‘one-way-tickets’ could be, for instance, organizations that offer multi-year investments such as trees, and to some extent expensive hybrid cows. In those cases, farmers are somewhat stuck with their decision for the longer-term. The time needed to have their investment become fully productive is also usually longer, which means the risk they bear is higher for longer. The value proposition is essentially different for a farmer who switches from maize to soya for a season (or as long as soya fetches higher prices) vs. a farmer who invests in planting cocoa trees that will take years to grow. If the cocoa prices fall, the farmer is stuck with his plantation, and it is extremely difficult for him to go back to other crops. The problem is identical for projects that require farmers to engage into a long-term organic conversion process.

There seems to be no easy way out for case studies proposing ‘one-way-tickets’, and their success will very much lie in their ability to develop business models viable with low penetration rates. The case of Khyati Foods, an Indian organic food processor, illustrates this challenge and points to some solutions. Khyati Foods has engaged 15,000 smallholder farmers in a 3-year organic conversion process, during and after which Khyati Foods commits to buy all the harvest. The certification, however, requires that no pesticides or other unauthorised substances are used at any point of time during and after the conversion period, which would nullify all the farmers’ efforts up to that point. While a worthwhile effort for farmers with fragile lands (in those cases, soil productivity should increase progressively, rather than decline, it is understandably perceived as a risky endeavour.

To help farmers along the way, Khyati Foods offers a combination of long-term incentives and short-term rewards. It insists on the fact that farmers will realize significant cost savings on chemical inputs (5-10% of income) from the first year onward, allowing them more financial independence from money lenders as a result. In the second year of production, farmers start reaping the benefits of higher productivity linked to organic soil treatment. In the fourth year, the organic price premium will kick in. Throughout those years, Khyati guarantees to buy their crops, even if not yet certified organic, and provides ongoing support. 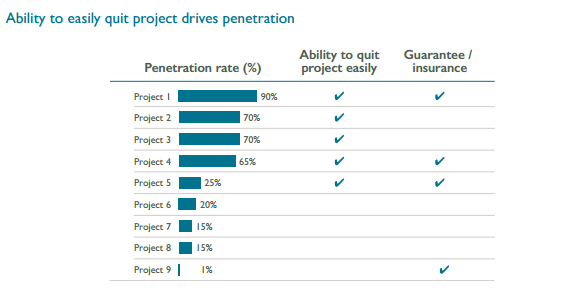 As adoption and penetration rates are a matter of risk, one may wonder if the provision of insurance effectively helps address farmers’ concerns. As shown in the table above, four case studies propose insurance schemes. In those cases, and based on a limited sample of case studies, it appears that this does not drive adoption and penetration. We explain this by the fact that what drives farmers’ aversion is not covered by those insurance policies. It is not the fear of the drought that will dry out the land, or the disease that will decimate cattle that they seek protection against: it is the ‘irreversible’ changes which drives farmers away from interventions that could improve their livelihoods. This does not mean that it does not make sense to insure farmers against adverse events, but that the guarantee offered by such insurances is not sufficient to convince most farmers to adopt a particular technology, crop or practice when it means difficult-to-reverse changes.

Hystra is a global consulting firm that works with business and social sector pioneers to design and implement inclusive business approaches that are profitable, scalable and eradicate social and environmental problems. In order to “be the change we want to see in the world”, Hystra itself is a hybrid consulting firm – a for-profit tool for social change. Since its creation in 2009, Hystra has conducted in-depth sectorial studies on clean energy, safe water, sanitation, affordable housing, nutrition and ICT-based business models for development, analysed winning sales and marketing strategies in micro-distribution, prepared business plans for pioneering inclusive businesses and supported the creation of a social impact fund. In six years Hystra has worked in over 20 countries serving about 50 clients, including large corporations, international aid agencies, foundations, and governments, to support business models that change the lives of low-income communities across the globe. For more information on Hystra and our publications, visit www.hystra.com.