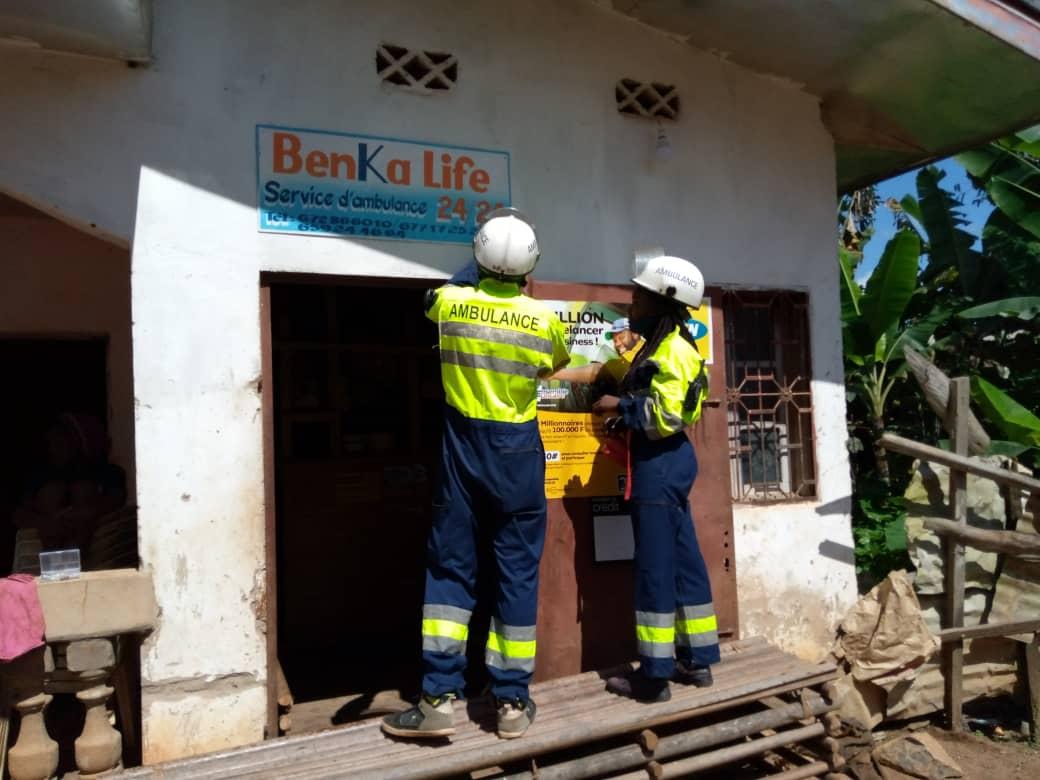 Working Together for a Fairer, Healthier World

In the little community of Bafang, Cameroon, Christian Kalieu, emergency service provider, has taken it upon himself to improve emergency services in his village. Kalieu, who runs BenKa Life ambulance service, laments that despite previous efforts, he and his team have been unable to significantly reduce mortality rates due to delays in their arrival at the scene of the emergency. To overcome this challenge, Kalieu says they have to be ready at all times to quickly locate emergency cases.

“We have to know where exactly the victims are to respond quickly,” he said. “My team has made some maps of the villages, but there are still a lot of places where we cannot arrive quickly.” Only the main street in Bafang, the busiest at the end of the day, is paved – the others are dirt roads. This means any wrong turn could easily add several more minutes to the route to response.

To top it off, some residents of Bafang do not trust the Ambulance. A history of delayed response has led to a steady lack of confidence in emergency services, with most residents either taking the taxi or a private vehicle – another threat to mortaility if the patient is not handled carefully enough.

Improving Emergency Response by more than 50 percent with SnooCODE RED

Enter SnooCODE RED, a digital system that cuts response times by as much as 56%, as validated in trials with the Vodafone Ghana Foundation. The mobile system comprises a control centre that shows Ambulance call centre operators the nearest, most appropriate health centres to an emergency, and a navigation app that directs Ambulance drivers to and from the emergency. All this happens offline, so no Internet, no problem.

Kalieu greatly appreciates the system’s offline capability. He is however wary of teething problems from the field, like mobile phone battery life. Many of the emergency team’s smartphone devices do not support GPS, for which reason they are unable to get proper locations using their phones.

Fortunately, the SnooCODE RED digital system is complemented by the physical component of house address plaques, which can be provided to all the houses he and his team have mapped. The plaques also carry reminders to call an ambulance service in case of a medical emergency. This augments the efforts of Christain and his team to constantly remind people to call the local ambulance service instead of using a taxi. These plaques will mark each home, cutting out the need for additional calls to confirm that the ambulance team is indeed at the right place.

The creators of SnooCODE RED, TinyDAVID, continue to work to ensure a fairer and healthier world, by making it possible for everyone everywhere, even people in remote rural areas, to have timely access to emergency services.

As Burkholder, Bergquist and Wallis (2020) succinctly put it, “Emergency care not only has the potential to address a large portion of death and disability in low- and middle-income countries, it is also essential to achieving the current Universal Health Coverage agenda and fulfilling the universal human right to the highest attainable standard of health.”

How digital platforms are aiding agri-SMEs bounce back