Editor's Choice, October 2017: Does inclusive business reach 'the poor'? At last some data!

At last!  Finally, we are beginning to see data about whether consumers reached by inclusive businesses count as 'poor'.  And, hearing about examples of businesses that combine sales to poor consumers with financial sustainability. A new reports by Deloitte, 'Reaching Deep In Low-Income Markets' was launched this summer. It covers 20 well-established inclusive businesses, shares data on which income groups they reach, and explores three hypotheses about whether and how businesses can reach 'down pyramid'.   As an unexpected bonus, it also sheds light on the role of subsidy in enabling business to combine financial growth with reach down pyramid.

The report acknowledges it is only a start, based on diverse often qualitative data, and indeed has some methodological flaws. But it's a good start, not only for distilling data on whether poor people are reached, but also for fascinating analysis of the business factors that constrain or enable reach.

The report asks three things. Firstly are any of these businesses managing to reach poor people and scale up operationally too?   The answer is yes.   They find that most are reaching fairly deep down the pyramid and many are operating close to sustainability.

I quote the authors themselves to avoid me misinterpreting language that is a tad sloppy when referring to poverty levels:

"Of our 20 case studies, we found that about three-quarters of them were reaching fairly low down the income pyramid. Most of these (about 10) have done rigorous internal or external studies to measure the income level of their customers. For instance, Burn [selling cookstoves] leveraged PPI methodology to understand that 24 per cent of its customers earn $2.50/day or less, and another 19 per cent earn between $2.50 and $4.00. BIMA [selling insurance] also conducted a survey based on the PPI, finding the percentage of its customers living on $2.50/day or less to be 53 per cent. M-KOPA [selling off-grid energy] partnered with the Gates Foundation to measure its customers, learning that 82 per cent live below $2/day. IFMR [selling financial services] used a proprietary methodology to determine that 70 per cent of its customers live on $5/day or less."

The data generates this fascinating graph (on page 23) mapping the income range of typical consumers for each company, the first I have seen like this: 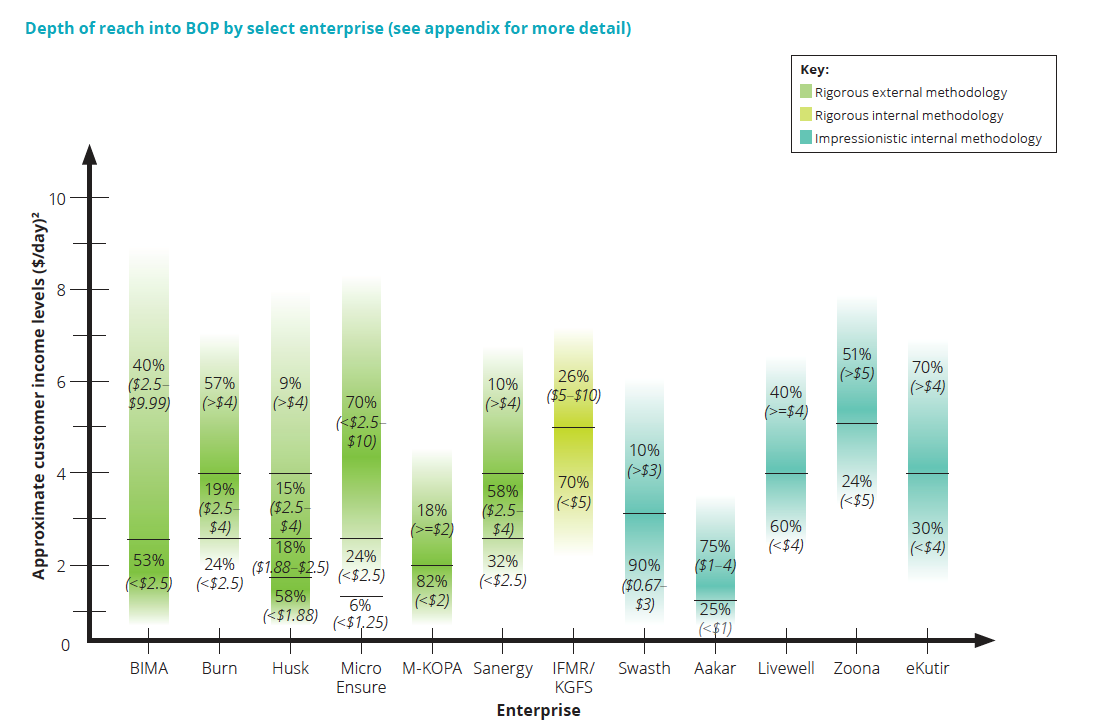 Secondly, it tests whether the 20 examples back up three sensible hypotheses:

These hypotheses are not scientifically proven or disproven, but the first two at least are challenged.  The authors conclude that: “being asset-heavy and selling a push product does not necessarily prevent companies from reaching the BOP in a financially sustainable way; several have done it.”  They have examples of asset light pull-product businesses, Zoona (selling financial services) and Planet Mobile (selling mobile-based language teaching) but Bima and Micro-ensure, selling insurance, are asset-light selling push products, and seem to be more engaged with lower-income segments.  Asset-heavy enterprises selling pull products are also combining commercial growth with reach down the pyramid, such as M-kopa (selling electricity).   The authors say that even asset-heavy companies selling push products are managing, although I don't see in their data which ones in this category are both reaching far down the pyramid and achieving commercial scale.

On the third hypothesis, they find that selling across a wide range of consumers does not seem to inhibit reach to low-income consumers. Indeed, they argue the converse, that inclusion of some higher-income consumers generating higher margins is likely proving to be critical to supporting financial sustainability of the enterprise.   However, I'm surprised they don't mention the risk of mission drift, as businesses confront the temptation to serve their higher margin consumers, particularly once they reach scale for commercial equity investment and tougher shareholders.

Perhaps the most important pattern that emerges does not prove or disprove the hypothesis, but relates to the deployment of subsidy.  The only enterprises to be reaching down pyramid and scaling, without subsidy are those which are relatively asset-light selling pull products. KGFS, BIMA, Urban Planet Mobile, and Zoona.  In all of the other cases, subsidy has been deployed in early stages.   Grants and patient capital helped them to 'get over the hump' of developing products and markets in a high-risk context.   The authors comment that early stage subsidy has not created ongoing dependency, but that failure rates in early years would undoubtedly have been higher without it.

I recommend this report to anyone interested in inclusive business, because is tackles an important question, is the first to do so as far as I know, and contains some high quality analysis about why and how businesses reach low-income consumers.

While the reach of inclusive business to the majority of world's poor has been at the back of the mind of many development practitioners in this space, it's only been explicitly addressed in business, investor and public discourse in the last few years.  And there has been virtually no comparative data, until now.   I'm surprised not to see more data from the Acumen Lean Data initiative, which has been rolled out across Acumen investees and others, and usually incorporates the Progress Out of Poverty Index, which gives indications of poverty levels.  Others, including Business Call to Action, are doing similar work. So there is by now more data that is not yet covered here.  But even to have data from 14 case studies is welcome.

But I have a large caveat:  I find the data or wording on reach to low-income groups sloppy, and because of that the report will be useful to those who are already in the space, but may not answer enough questions of development actors outside this space. Of course, businesses will collect data in any which way, either based on earnings of a bread-winner, or through PPI, or through household income reports for credit applications. That's fine. Data will thus be difficult to compare.  But for an analyst, it's clear there is a huge difference between someone 'earning $2 a day' and someone 'living on' $2 a day.   A sole breadwinner earning $2 for a family of five is actually living on 40 cents per day - as all these figures are per person.  The report slips in and out of 'living on' and 'earning' sometimes in the very same sentence and even when referring to data from the PPI, which definitely generates results based on what people 'live on.' So, I am left seriously confused as to whether data has been converted from household income to individual per capita income before being compared.  Another wrinkle is that PPI data, based on global poverty lines, is based on purchasing power parity (PPP), while business data will of course be based on market prices. The difference can be huge: someone living on $2 a day in PPP may only need cash in their hand of just over a dollar a day in market prices (depending on which country they live in, but the difference is generally greatest in the poorest countries).  I don't see these issues addressed even in footnotes, and for such a path-breaking report, that is a shame.

I'm surprised the report does not put the income data from the companies in the context of global poverty levels The IFC and UN use a very high threshold - around $10 a day - to define the Bottom of the Pyramid and thus to define inclusive business.  This has long been a problem for more development focused actors, deploying charitable or aid money, who focus on the bottom half the global population who live under $5 a day ($PPP, per capita) or lower. Bear in mind that only 10.71% of the global population are now estimated to live on under $1.90 per person per day (purchasing power parity) according to the World Bank. They are the extreme poor, who most recognise are going to need something other than inclusive business to graduate from extreme poverty.  But 28% (over 2 billion people) live on under $3.20 (PPP, per capita per day) with the figures for Asia at 52% and for Sub-Saharan Africa, 68%.  So, for inclusive business to make a dent on global poverty and inequality, it’s reaching people in the $1.90 to $3.20 bracket that I think really matters.  There are good examples in the report of businesses operating in this income segment, but others don't.  The difference could usefully be explored.  The tendency to blur over the exact data, probably reflects the weakness of underlying data and perhaps a wariness about making statements on what counts as poor, leaves us without a clear picture.

So the report provides welcome assurance that businesses can push down pyramid and still reach financial sustainability, but the question of how far down pyramid, and how much of an overlap there is with development agendas, remains.   That said, the analysis here is a huge step forward, and I hope their calls for further work in this area are heeded.

This report was developed jointly by Monitor Deloitte, the MacArthur Foundation, the Omidyar Network, and the Rockefeller Foundation

The Executive Summary is excellent for the main findings. In the full report, there are many analytical fact-filled tables and diagrams in this report.  I particularly recommend:

$5.50 (PPP $, per capita per day) marks the poverty level that roughly acts as median, cutting the global population in half, and 83-85% of the population in South Asia and Sub-Saharan African live under this.

This report covers reach to low-income consumers very much from the business point of view: how to adjust the model to economise on assets or marketing. Some issues about what poor consumers value is captured in the discussion of 'push products' and 'pull products'.  But for much more on the discerning low-income consumer, their focus on quality and risk and their willingness to invest considerably shares of their income, see other material including recent Hystra reports on the agricultural sector and on nutrition.

This blog is a part of the October 2017 series on NGOs in inclusive business, in partnership with endeva.

Read the full series for insights on what kind of roles NGOs have carved out for themselves, either as partners of companies, as intermediaries, investors, or even as entrepreneurs and their lessons learnt in doing so.

Time for a fresh look at inclusive business