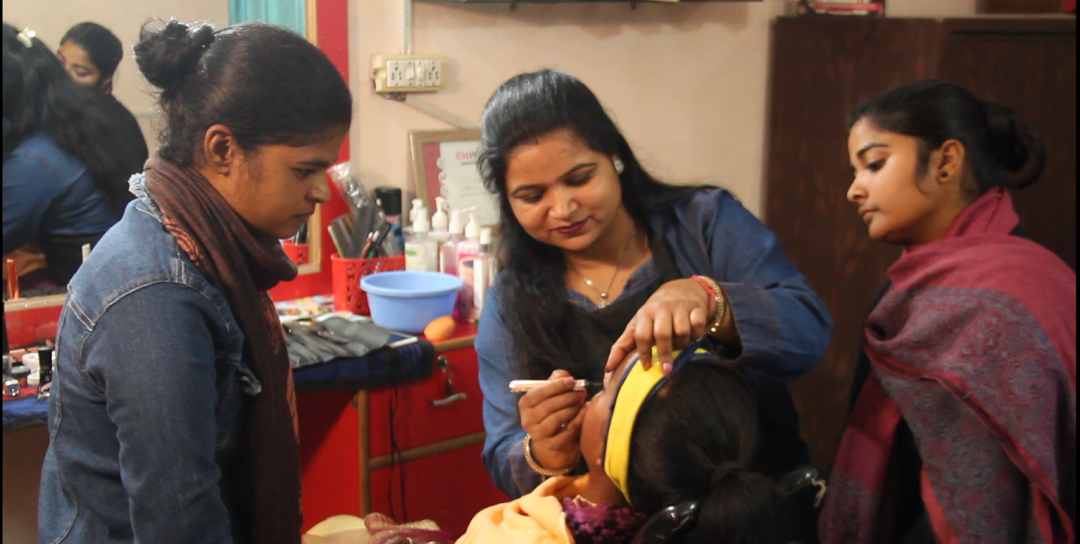 A bachelors in Business Administration from Narsee Monjee and a postgraduate from the Indian School of Development Management (ISDM), Mrinal has spent the last 8 years in the skill development sector and has a deep understanding of it. In his current role, he is working on designing and implementing innovative livelihood models for youth, women and micro-entrepreneurs belonging to the informal sector, which can be scaled.

How storytelling strives to make skilling aspirational in India

Started in 2018, Empower Plus is the fee based vertical of Empower Pragati. It offers market driven vocational courses at subsidized prices for low income groups. It has two sub-verticals: Beauty Skills and Future Skills.

Despite the efforts of the government, sector skill councils and training organizations to create a state of the art infrastructure across the country and a robust training curriculum and framework, employment linked vocational training in India is far from being aspirational for the youth.

The young Indian’s first preference remains a government job, for which they are ready to prepare for years on end. The next best option is to become a doctor or an engineer and more recently so, do an MBA. At the same time, women’s labour force participation has stagnated and is expected to decline further because of labour trends, technological disruption and the continuance of constraining social barriers. Also, counter-intuitively, as the household income increases, women drop out of the labour force as domestic non-market work is perceived to have a higher status than market work, as per a research study conducted by ILO.

Employment linked vocational training is a fall back option, not something the youth aspire to do, and entrepreneurship for the majority of the informal sector is a necessity to make ends meet, not a choice.

If India is to reap benefits of its demographic dividend and become the skill capital of the world, changing this narrative is imperative and extremely urgent. This is why sharing stories that inspire change and challenge deeply held social norms is the need of the hour. Stories of positive nonconformity that have the potential to bring about everlasting change need to be told.

Earlier this year, we captured Manpreet Machal’s story, a successful beautypreneur from Devigargh, a small village near Patiala. ‘Honsla’, meaning perseverance in Hindi, showcases Manpreet’s journey from being a homemaker to becoming a successful entrepreneur. It is a story of grit, passion and commitment. She fought the patriarchal mindset in her household by first convincing her reluctant husband, who then helped her fight against all odds to join the Professional Beautician Course at our Patiala centre and then setup up her own parlour.

Even though the beauty sector is dominated by women, the gender disparities are huge; this is especially true of women who are solo entrepreneurs running home based parlours or doing freelance work in rural or semi-urban areas. Because of a prevalent patriarchal mindset that is predominant in these households, there are several restrictions imposed on women’s mobility and decision making by their family members and the society at large, despite them being entrepreneurs. For example, before marriage women will not be allowed to setup their own parlour as the underlying assumption is that they will migrate to another town after marriage. Freelance work at this stage is comparatively more acceptable. Conversely, the same women after marriage are discouraged from taking up freelance work because of a stereotypical mindset that discourages women to go to other households for work or because their primary responsibility is household work and so setting up a home based parlour is the best compromise made by the family to accommodate the women’s aspirations.

Through all the insights we have gained over the years, we have learnt that this has severely restricted the women’s ability to scale their businesses, to improve their skills and think freely as entrepreneurs. More than 40 per cent of the women that enroll in our beauty courses are women who are already running their own parlours or have had some prior experience of working in this sector. Most of them did not have any access to formal training previously and had learnt on the job. They come and join our training programmes because of how reasonably priced the courses are and because they see this as a good opportunity to upskill themselves and enhance their businesses.

According to industry estimates, there are 65 lakhs (6.5 million) beauty salons in India, but only 30 per cent of them are registered. Over two-thirds of these salons are owned and run by women and young girls from low-income groups, who form part of the informal sector. In the last four years, we have been able to train only a few thousand of these women. The challenge now lies in how to scale this programme across the country.

Telling stories is one of the most powerful ways to influence, teach, and inspire people. In our context, it is even more important because of the reliability that these stories offer. Women who are learning about these stories come from similar economic and social backgrounds, and have similar aspirations to the one whose journey we have captured, and so these stories act as a much needed nudge in their lives. Stories such as Manpreet’s also help in shifting the family’s mindset about working women and make them question their patriarchal beliefs. Also, our limited marketing budgets discourage large scale advertisements of our programmes and here too we have noticed that these stories have helped us reach out to a wider audience in a cost effective and impactful manner.

In keeping with these efforts, we have launched the ‘Start your 2nd innings today’ campaign which aims to reach out to women who have had to drop out of the labour force because of marriage, parenting or any other reason and now wish to restart their careers but don’t know where to start or need a nudge.

Through the campaign, we will share stories of women whose lives are relatable, and who have chosen the path of entrepreneurship after graduating from our beauty academies in their second innings. As part of the campaign, we will also be doing film screening sessions across the country in an attempt to encourage dialogue and build a sisterhood of sorts that leads to sharing, dreaming and growing together.

How storytelling has helped in bringing about small but substantial changes

There is already enough evidence to believe that the women view these courses as aspirational. Vibha, a student from  our  Aurangabad centre, mortgaged her jewelry to enroll in the professional beautician course. Anjali, a domestic helper whose monthly income is less than 100 dollars a month, has signed up for the make-up artist course at our Meerut centre and aspires to have her own make-up studio one day. Many women have taken up part time jobs while doing the course to afford the fees. Women who are married and are primary caretakers of the household wake up at 4am to ensure that they have finished all their household chores before they come to the training centre. Some of our students travel as much as 80 kilometers every day to attend classes, simply because there isn’t any institute in their district that is offering them such a holistic course at such subsidized prices.

In the past four years more than 60 per cent of the women who have completed our beauty courses are running their own parlours or working as freelancers. Women who already had their own parlours have seen their income levels rise by 1-1.5 times post training. They have also reported an increase in their level of confidence while interacting with customers, leading to upselling, cross-selling and higher levels of customer retention.

Through the 2nd innings campaign and other such similar storytelling initiatives that we shall launch in the future, we hope to reach out to a much larger number of women and youth across India and create many more such stories of change.

*Note: Vibha and Anjali are pseudonyms; original names have been changed to protect identity

Developing a super app for women beauty-entrepreneurs in India

Talking #InclusiveBiz No. 2: Educating the most vulnerable populations effectively despite the pandemic through participatory solutions