Sanergy: looking back to 2011, looking forward to scale

Back in 2011 Sanergy applied to Sida's Innovations Against Poverty programme, for a grant to improve design of squat toilets. At the time, Sanergy was operating 2 pilot toilets, aiming to expand to 60 by the end of 2011. As of today, Sanergy operates over 650 toilets in the Mukuru and Mathare slums of Nairobi. The network of toilets is used 27,000 times daily.

There is still plenty of distance to go to achieve real scale vis a vis market need, given the millions of people that lack access to clean safe toilets. But it's always good to look back and see how a business has successfully evolved and grown.

Back in 2011, when Sida and the IAP team were assessing Sanergy's application, it was already clear the model was built for scale: selection, training, financing and support of micro-franchisees (known as Fresh Life Operators) was key to the model then, and remains so now. For many businesses, micro-franchisees have not proved to meet high hopes. For Sanergy it remains core: franchisees promote the bright blue brand and earn a decent return. It was also clear back then that there was a commercial proposition, not based on any huge amounts that slum-dwellers may pay to use toilets, but based on converting their human waste to fertiliser and electricity. For many of us, the idea of fee-paying toilets was fairly new; the idea of poo-to-power for human waste was newer still.

Another theme of discussions back in 2011 was the value of investing in testing new designs with consumers. These days the socent space is choc-full of discussions of human-centred design and the importance of consumer feedback. One of the reasons that IAP grant money was deemed useful in 2011, was that it would enable Sanergy to invest in improved design and consumer feedback earlier, rather than waiting until its own cash flow would afford such expenditure.

So what happened next? Designs were tested, revised, adapted. Consumers listened to. And recently I was able to visit Sanergy to see the improved models. 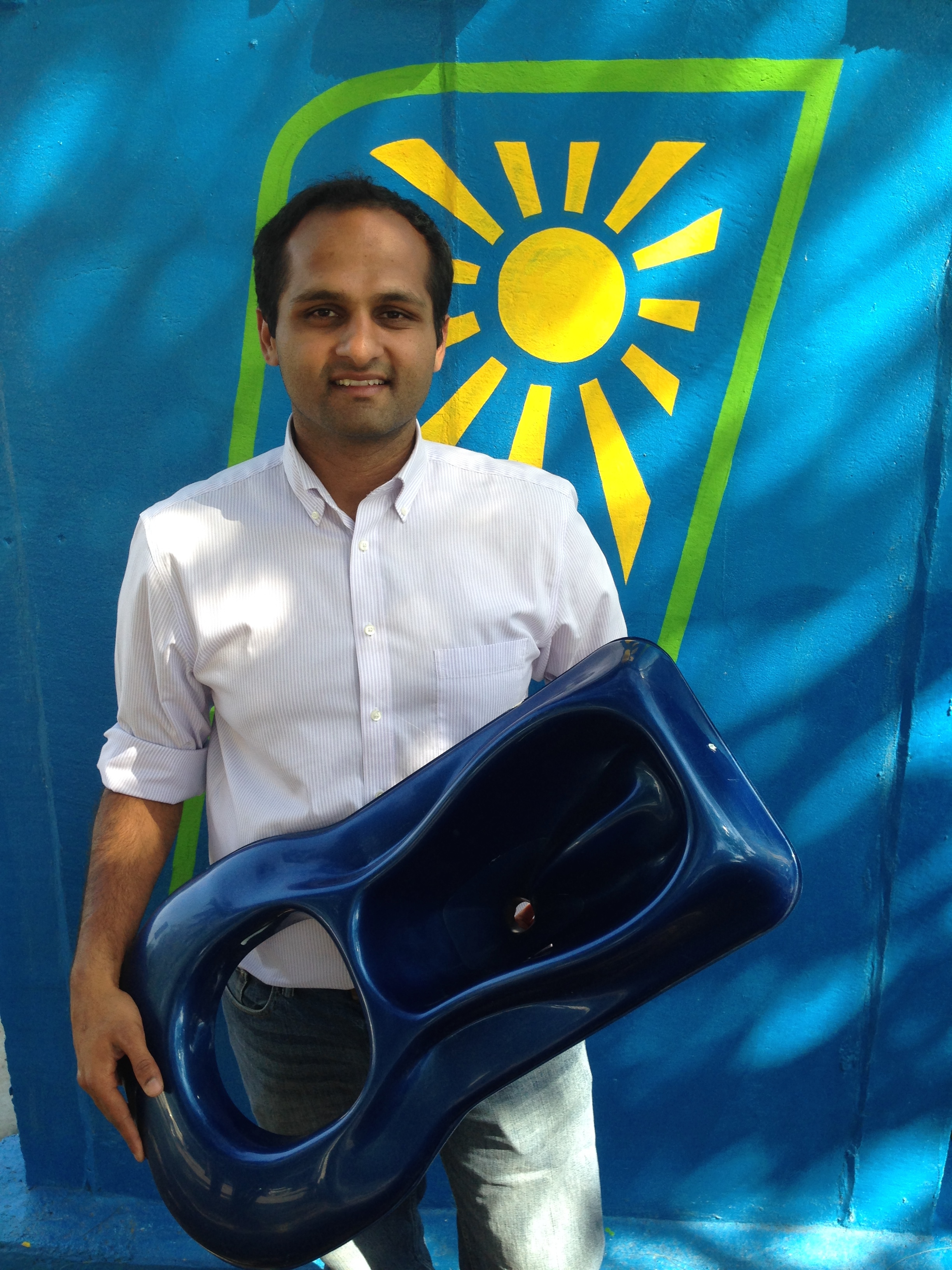 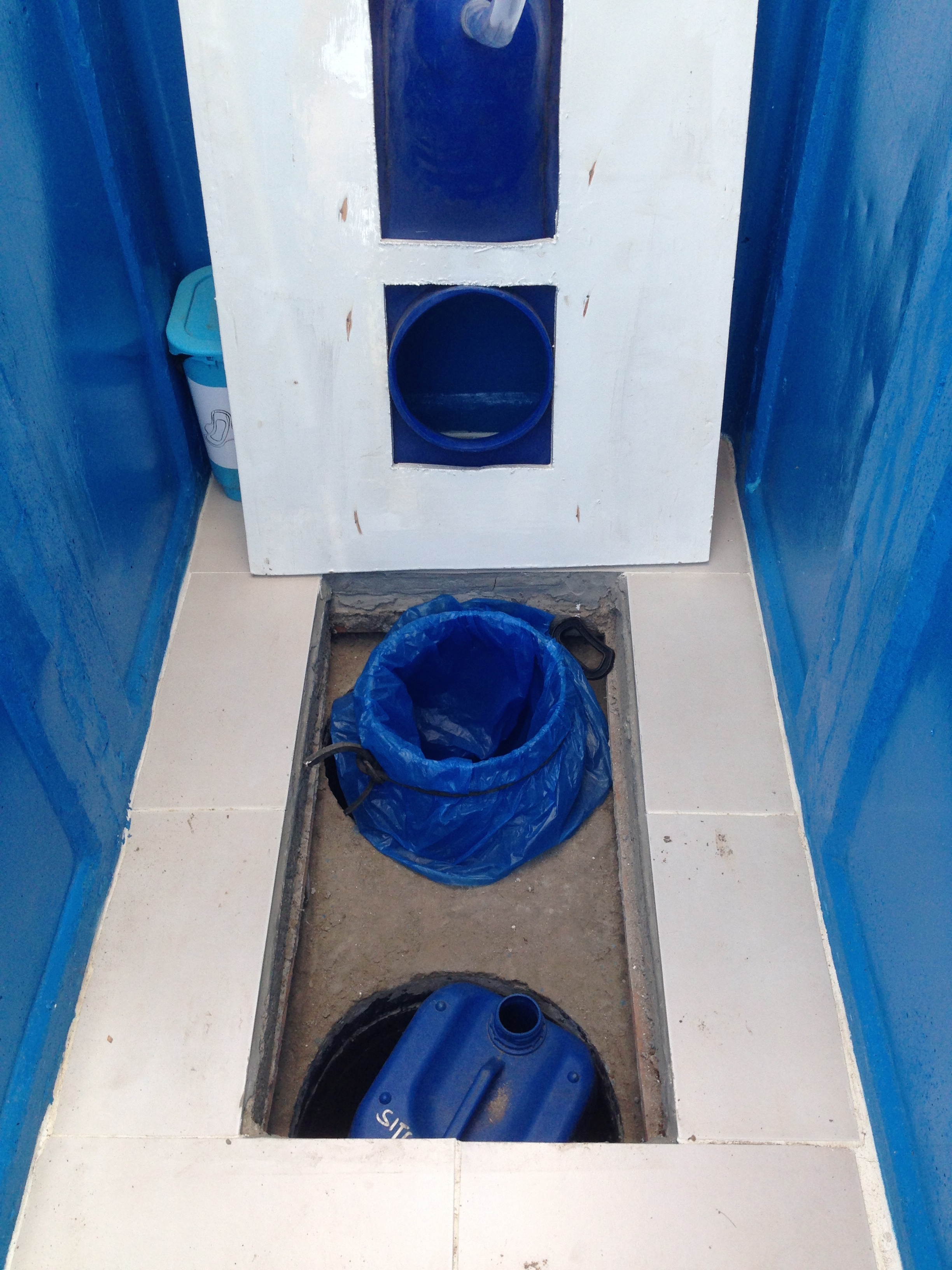 Ani Vallabhaneni (co-founder) is here holding the improve toilet plate. You may not want all the gory details of how it suits both men and women, reduces splash-back etc. But you can gather the sleek design. And another key point should be obvious: solid and liquid waste go through different holes. That's because they go into different containers in the ground, as this photo of the 'underneath' of a toilet shows:

There are many reasons to keep solids and liquids separate - less smell for the users, easier collection for the waste disposal team, and a head start for the processing of converting these wastes into useful products.

So what half dozen lessons did I take from my recent visit?

1. The IAP grant was useful!

3. There is more complex detail to good toilet design and waste processing than I ever thought I would know.

4. Improving design simply never stops. Sanergy has recently changed the cubicle construction, so that the pre-fabricated walls can be more easily constructed in crowded settlements with minimal access. The containers in the ground are improving too. Opportunities are endless for making operations easier and consumer appeal greater.

5. Consumer feedback and insight doesn't stop either. Sanergy is investing more in understanding what drives consumer behaviour. What drives early adopters may be different to what drives scale. Affordabilty may be just one - perhaps a minor- factor for low-income consumers. Security, proximity, cleanliness, status .... can all affect behaviour and a successful social enterprise can serve people in many ways.

6. Scale is relative and scale is slow. Sanergy is well known as one of the main players in this space. IAP is certainly not the only challenge fund or donor to recognise their potential. Investors are now involved, and indeed Sanergy is in the portfolio of Novastar Ventures, a fund manager receiving investment from the DFID Impact Fund. While the progress and growth since 2011 have been huge, there is still a vast way to go, not only for the company, but before commercial toilet models make a dent on the true size of the sanitation challenge.

This blog is a part of our April 2015 series on scaling inclusive business. To view all the articles in this series click here.

Who forgot about the house?