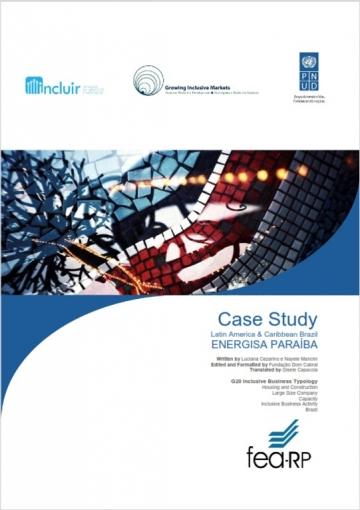 The mission of Energisa Paraiba is to transform energy into comfort and development, by offering its customers energy and social solutions (ENERGISA, 2015). Located in Paraiba state’s capital João Pessoa, the company focuses its efforts on engaging with vulnerable communities into economic development initiatives that promote income generation and employment.

The “Bem da Gente“ Programme (People’s Good Programme), was created in 2012 in the Muçumagro community of João Pessoa. Its proposal is mostly to promote local social and economic development based on inclusive self-sustainable business models, that also enhanced the skills of community members. By offering courses and training, expanding and improving existing businesses, encouraging creativity and new ventures, promoting culture and cooperation, its objective is to empower the community.

Equally important is that by meeting these goals, Energisa also minimized some of its own strategic problems. Indeed, the high default rates on payments, the high power disconnection or reconnection costs and the bad underground electrical installations in disadvantaged communities caused up to 12,6% of energy loss and urged the company to take action.

After the implementation of the projects, entrepreneurs’ expenditures were monitored through periodic visits that aimed at channeling resources towards the goal and avoiding inappropriate uses. The promotion of social inclusion for the most vulnerable groups and the creation of environments addressing local poverty, as well as an efficient management, made Energisa Paraiba the best Northeastern power distributor in 2014. Also, it has received a positive review in the Aneel Consumer Satisfaction Index (IASC), among other awards.

In terms of financial results, Energisa could observe a reduction in energy loss, from 21% in 2012 to 2% in 2014, as well as in the defaults on payments, from 6,35% in 2012 to 4,65% in 2013, resulting in higher revenues for the company. “Bem da Gente“ is therefore aligned with the entire Energisa operation and its inclusion strategy is directly related to the company’s core business. This alignment has extended the economic, social and environmental benefits, such as improvements in the company’s image, energy efficiency and job creation.

Many actors were also important in this process: the Dom Cabral Foundation was in charge of the initial socioeconomic analysis; the credit banks offered microcredit lines; SEBRAE was responsible for training the entrepreneurs; 3E Engineering was responsible for advising the project on its operational aspects; and the Muçumagro’s resident Association.

The solution to this challenge lied in the ability of the company to develop the energy efficiency department and to consolidate the performance indicators with economic, social and environmental results. Especially, Energisa had engaged with the most excluded communities primarily envisioning to promote social values and improve their well-being, regardless of the potential profit that “Bem da Gente“ could generate.