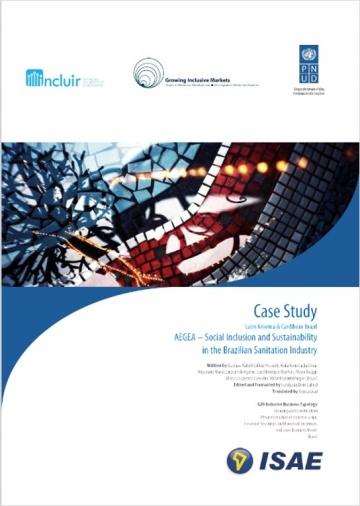 AEGEA Saneamento e Participações S.A. (AEGEA) is the third greatest water sewage service provider in Brazil, a country with serious problems in terms of sanitation and where significant part of the population has no access to basic services yet.

Hence, AEGEA intervention focuses on reducing environmental impacts and promoting public health, helping improve life quality of low-income individuals. The company adopted the strategy of increasing the number of people who benefit from these services, focused on improving service quality and promoting the operational efficiency of the system under its supervision, in the short run.

Currently, EAGEA is represented in eight Brazilian states and supplies more than 2.8 million people, among which, approximately 285,000 earn one basic salary per month. For low-income individuals, the services provided by AEGEA cover their basic needs and also promote social inclusion. For AEGEA, in its turn, individuals’ participation in the business model allows an increase in revenues, and ensures the compliance with contractual landmarks agreed upon with concession grantor municipalities, therefore enabling market trust and investor relationship reinforcement.

Between 2010-2014, the company’s net revenue surmounted 2.5 billion reais. Apart from that, AEGEA’s activity, oriented according to the sustainability guidelines, has had great benefits on the public domain. In Campo Grande – Mato Grosso do Sul – for instance, one of the concessions promoted an increase in the coverage rate for cities equipped with sewage collection systems, of 29% to 73% between 2005-2013, thus reducing the number of diseases transmitted through contaminated water. In the region of Lagos, in Rio de Janeiro, this increase was of 0% to 76% between 2006-2013, enabling the recovery of the world’s largest lagoon and, thereby, fostering the development of the local economy through fisheries and tourism.