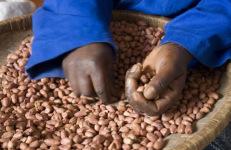 In this venture, processing company Afri-Nut aims to move Malawian smallholders up the value chain, while expanding the volume of Fairtrade and other value-added peanuts produced for international and domestic markets. Groundnuts are a key staple crop amongst smallholders in Malawi, providing a vital source of cash income and nutrition for rural Households.

The commercial arm of NASFAM, exports unprocessed groundnuts produced by smallholder members. They are sold to domestic and regional markets, through TWIN and TWIN Trading. Unprocessed Fairtrade peanuts are exported to Europe, including UK supermarkets. In Europe, raw kernels are currently traded through Liberation, an existing joint venture between TWIN and NASFAM. The aim of the Afri-Nut processing facilities is to enable expansion into value-added processed nut products including blanched peanuts, roasted kernels and peanut paste for peanut butter and nutritional supplements.

Afri-Nut is a specialised groundnut processing and distribution marketing business. In a sector that has suffered massive decline in exports and inadequate investment, this initiative creates a viable business thanks to the blend of commercial and development investors that have come together, bringing experience in the sector, expertise and new finance, plus access to expanding markets. The intention to move beyond production of raw groundnuts into a range of value-added products with higher profit margins marks an attempt to significantly shift groundnut exports up the value chain. The company was able to break even in the first year of operating but there have been changes to the original business plan due to both internal and external factors and the business is currently considering the best way forward.

Groundnuts are a key staple crop amongst smallholders in Malawi, providing a vital source of cash income and highly nutritious food for rural households. They are considered to be ‘women’s crop’- with women carrying out the majority of pre and post harvest activities. One of the key development indicators this venture is tracking is the number of women engaged as groundnut suppliers to Afri-Nut. Another key impact of this venture on the agricultural sector is Afri-Nut’s plan to contribute to reducing the problem of aflatoxin contamination. Aflatoxin is a carcinogen produced by a fungus that grows on crops as a result of poor pre- and post-harvest practices. The trade losses attributed to aflatoxin contamination are $1.2 billion globally and $450 million pa across Africa. Afri-Nut’s goal is to be a benchmark business that focuses on food safety, particularly in relation to aflatoxin control of peanuts produced for domestic, regional and international markets.

Afri-Nut also plans to be able to sell ‘safe’ peanut paste to manufacturers of Ready to Use Therapeutic Food (RUTF) – an important treatment of malnutrition and in HIV Anti-retro Viral programmes – such as Valid Nutrition, a social enterprise based in Lilongwe.

Innovation in this project lies, firstly, in the blend of social and commercial investors that have come together, for the first time in Malawi, to establish and run a profitable agro-processing business. The social investors have secured a profitable return which drives change in the sector to improve food standards, public health and farmer livelihoods. The farmers’ association recognise that a commercially-structured profitable business provides expanding market opportunities for Malawian producers. Commercial investors recognised that the sector, currently underperforming, provides a viable long-term business proposition.

Secondly, the project is leading the way in seeking to tackle aflatoxin and extend aflatoxin risk management from export market to the regional and domestic markets. There is potential for impact at scale among: thousands of groundnut farmers in Malawi; many more thousands who consume domestically traded groundnuts at risk of aflatoxin; plus the potential boost to the provision of nutritional supplements to malnourished and HIV-positive people in several African countries.

The objectives of facility support to this venture include providing expertise to assist with the establishment of Afri-Nut’s shareholder arrangements, value chain development, recruitment of senior staff and establishment of key performance indicators that track delivery of the combined social and commercial goals of investors. A case study has been written jointly with the Facility in 2011.

The new company successfully started production in November 2011, which was impressive given the challenging economic conditions in the country. The first year review reported that revenue was lower than projected, but Afri-Nut was able to achieve near break-even due to the season's high nut prices. A total of c. 1,000mT of groundnuts were purchased primarily from NASFAM smallholders, but the quality was poorer than expected with high aflatoxin levels recorded. year 2 will be key to tackling quality issues, deciding on strategic product range choices and ensuring that the investor partnership has clarity on governance, partner roles and company Mission.

A smallholder perspective on the Malawian Macadamia Industry