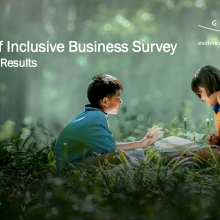 GlobeScan and Business Call to Action (BCtA) partnered to launch the 2018 State of Inclusive Business Survey to help advance core business activities that are inclusive of low-income populations and contribute to the achievement of the Sustainable Development Goals (SDGs). This report provides practical insights for companies on inclusive business, and identifies drivers of inclusive business motives and likelihood to commit. Stakeholders who took part in this study are all from BCtA’s own database of members and contacts, as well as GlobeScan’s community of sustainability professionals.

This survey involving 193 companies, non-profits, academic institutions, government agencies, thinktanks/research organizations, investor/rating agencies, and service organizations shows how inclusive business practice and initiatives have increased over the past three years, particularly in Asia and the Pacific, Africa, Latin America and the Caribbean, and among large national companies, and small and medium enterprises (SMEs). Identified as key motivators for IB transition are the Sustainable Development Goals (SDGs), brand and reputational benefits, and tangible impact on low-income communities.

Although still faced with financing, regulatory and operational gaps, and barriers to scaling up, organizations’ commitment to IB is driven by the following, which should be given greater attention by current and potential adopters of IB:

This survey was undertaken by Business Call to Action (BCtA)—a global advocacy platform for inclusive business—in partnership with GlobeScan to know more about current perceptions of IB by public and private stakeholders and the current state of IB practice globally in order to identify the drivers of IB commitment, and provide practical insights to companies.

The report notes that companies’ engagement in IB initiatives has increased over the past three years. Compared to multinational corporations, greater engagement and commitment was reported among large national companies and small or medium sized enterprises (SMEs). A majority (68%) of respondents believe that IB plays a role in reducing poverty and inequality, with company respondents rating its impact higher than those from other sectors. The Sustainable Development Goals helped companies better define sustainability objectives, particularly among SMEs, which as a result influenced IB transition and practice that is contributing mostly to the achievement of decent work and economic growth (SGD 8) and ending poverty (SGD 1).

Among early adopters of IB, those in the ICT, agriculture, and food and beverage sectors are ahead of others in their IB initiatives, while those in the energy and utilities sectors are still lagging. Almost half of IB respondents are at the scaling up stage (particularly among large national companies), and most companies with IB initiatives are operating in Asia/Pacific, Africa, and Latin America/ Caribbean. IB initiatives tend to be integrated across the entire enterprise or in Sustainability/CSR departments, while other sectors reported more varied department implementation. Respondents from the financial services sector reported higher levels of implementation across the entire enterprise. Engagement with low-income communities happen at different points of the value chain. Those in the financial services and health sectors report engaging low-income populations primarily as consumers, while those in the agriculture, food and beverage and energy and utilities sectors report more engagement as employees and suppliers. Brand equity/reputation is the most cited benefit gained from IB engagement, as a result of trust-building among stakeholders leading to greater leadership recognition. Other significant benefits gained are access to new markets and competitive advantage.

Despite advances in IB modeling and implementation, the survey also highlights persisting challenges and barriers to IB adoption. Insufficient financing is seen as the main barrier and unfavorable government regulations as the main risk to IB initiatives. Other critical barriers to IB growth for IB respondents are insufficient internal capacities, and misalignment between commercial and social impact expectations. Apart from regulatory restrictions, climate change impact is also viewed as a major risk. The survey, however, found a mismatch between identified risks and current management priorities—although unfavorable government regulations and the impact of climate change on low-income communities are viewed as the main risks to IB initiatives, they are treated as low priority in organizational management compared with other potential risks (i.e., gender inequality in communities) perhaps due to the degree of difficulty in addressing them. Data collection, risk management, and staff compensation are seen as the weakest areas in the implementation of IB initiatives; most of the respondents reported challenges in talent attraction and retaining capable professionals, and in aligning compensation to match achieved results.

Achieving impact through the everyone a changemaker revolution